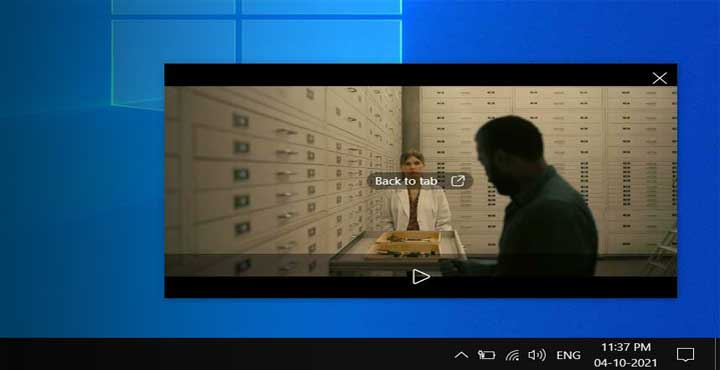 Desktop Browsers like Google Chrome and Mozilla Firefox have a Picture in Picture mode, allowing you to play videos in a floating window which remains on top of the other tabs.

The video player pops out of its tab and completely detaches from the browser window and remains active in the foreground on top of other open app windows..

You can resize this floating pop-out window and drag it to any part of the desktop screen. It would remain visible even when you minimize the browser window. You can simultaneously work in other tabs or apps while the video plays in the floating window.

This mode in desktop browsers was first introduced in Safari Browser on macOS Sierra released in 2016 and was later adopted in Chrome and Mozilla Firefox. The Picture in Picture mode for videos is present natively in Microsoft Edge Version 93 and later.

Moreover, it does not require installing any third party extensions or add-ons to enable this feature.

The Picture in Picture mode in Edge works perfectly on YouTube and Netflix however, some of the popular video sharing sites like Vimeo are not supported so far.

To enable PIP mode in YouTube, open any video and then right click twice within the video player area while the video is playing. The first right click would open YouTube’s context menu, right click again to open Edge’s contextual menu and then select Picture in Picture mode.

The video player would detach from the tab and then appear in a floating popup window. You can resize the floating window or drag and position it anywhere on your desktop. It would stay on top of other open windows and apps.

The Floating Windows has control to play or pause the video but the video progress or the seek bar is not displayed.

Global media control button will automatically appear in the Edge toolbar when it detects a video, audio or any media file playing in the browser. This tool lets you play or pause videos directly from the toolbar without the need to find the tab playing the media.

In Google Chrome Picture in Picture is a part of the Global Media Control Panel. In Microsoft Edge, however, you would have to use Edge flags to enable this feature.

Before enabling these flags make sure that you have updated to the latest version of Microsoft Edge. These flags only appear in Edge version 93 and later. You can check the Edge version by typing the following command in the Edge’s address bar.

To enable the PIP button in the Global media control you have to enable the following two flags:

To enable this flag type or copy-paste the following address in Edge’s address bar and hit Enter.

To enable the flag type the following in Edge’s address bar and hit Enter.

Click on the dropdown and select Enabled. Restart Edge to enable the Global Media controls and Picture in Picture mode button.