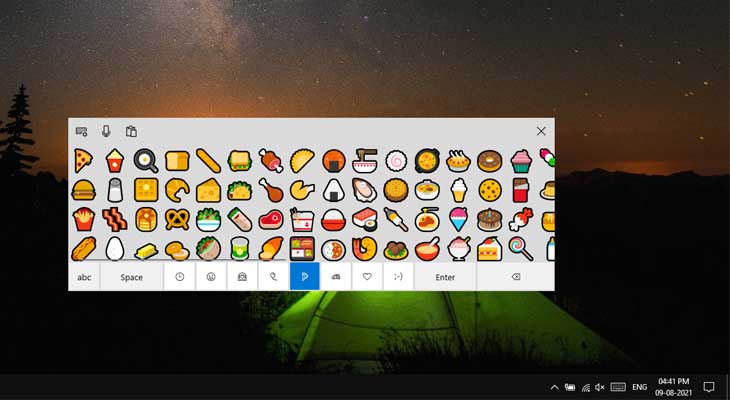 Emojis are a light hearted and fun way to express your emotions and feelings in digital communications. They are the modern versions of the emoticons which were first used almost 40 years ago. The emoticons made use of letters and punctuation characters to convey facial expression.

Emojis on the other hand use pictorial versions that were first introduced in Japanese phones in the early ‘00s and were later adopted by western cell phone manufacturers.

They have now been standardized and have become a part of the Unicode standards. This inclusion in Unicode means they would have an uniform look across all operating systems and platforms.

For example, the Unicode for a slice of pizza 🍕 emoji, is  (U+1F355). This Unicode code is automatically recognized in all the smartphone and desktop operating systems and they would translate and display it as a slice of pizza.

Using the Emoji Picker in Windows 10

To use emojis in windows 10 you can use the Emoji picker which is in-built into the operating system. Emoji Picker would work in all windows applications and programs.

To insert the emojis, place the cursor in a text field in any app and then click on the emoji of your choice.

For example, to insert an emoji in the Notepad app open notepad. Then press the Windows + . key to open the Insert Emoji panel.

Type ‘smile’ in notepad and the Emoji panel would automatically show all the matching emojis for ‘smile’. Click on the emoji in the panel to insert.

The Emoji panel also allows you to insert symbols (© ® ⨁ etc.) and other variants of emojis like, Kaomojis ╰（‵□′）╯which are horizontal emojis created with special characters.

You can also change the skin tone of the emojis by selecting the color at the top.

You can also insert emojis using the On-screen Touch keyboard. The touch keyboard is designed for touch enabled computer screens but you can operate it using your mouse or touchpad, if your PC is non touch capable.

To open the Onscreen touch keyboard, right click on the Windows taskbar and select the “Show touch keyboard button” option from the contextual menu.  To open the Touch Keyboard click on its icon in the taskbar.

To view Emojis in the Touch Keypad, click on the Emoji button near the lower left corner.

Click on the emoji to insert it in the text field.

You can select the different variants and types of emojis by clicking or tapping the buttons at the bottom of the touch keyboard.