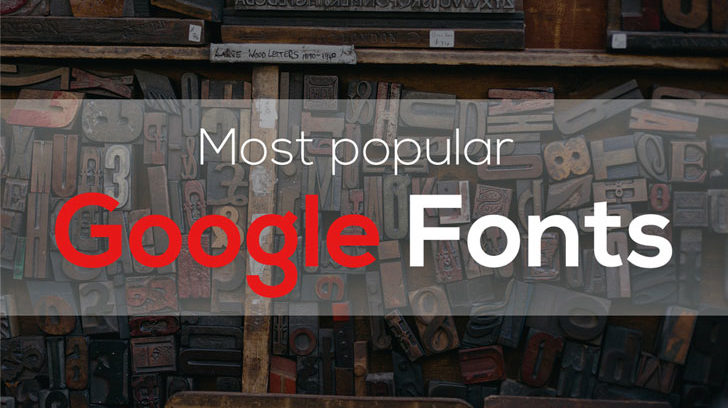 Google Fonts is a web font database which was launched by Google in the year 2010. All the fonts in Google Font database are free and published under the SIL Open font license 1.1 and Apache License. These open source licenses allow Google Fonts to be used on any website, whether it’s personal or commercial.  This means, you can safely use Google Fonts without worrying about their licensing.

Google Fonts contains fonts designed by individual designers and type foundries from around the world and are available for use in more than 135 languages. You can sort the font families by categories like serif, sans-serif, handwriting or calligraphy, mono space and by different styles like italic, semi bold, thin and thick etc.

The Google font database contains around 850 font families which are freely available for download and for embedding into your website. You can either download the font to use in mock-ups, documents and to use locally on your computer or you can embed them into your website using the Embed link provided by Google Fonts.

Google fonts embedding allow the fonts to be used on every platform even if the font is not installed on the local computer. The Google font embedded in your website is downloaded directly from Google’s servers whenever your web page is loaded in a browser. The font files are compressed by the server to enable faster download and once downloaded are cached in the browser and reused by any other web page that uses the same Google Fonts API.

So, if the user has already visited a website using a popular Google Font, then most probably the font file is available in the cache memory and the browser can skip loading it and use it directly from there.  This feature enables Google fonts to reduce the load time of websites by skipping the font download part.

Google fonts are used on millions of Web Pages around the world and Google servers services more than a billion font file requests in a day. Some of the popular Google Fonts like the Open Sans are featured in more than 19,000,000 websites which generate more than 25 billion font requests in a week.

All these features and benefits make Google Fonts library a perfect choice for Web developers and designers. Although most Google fonts are designed for web and digital usage, some of the popular fonts can be used for print design as well. Some of the popular fonts  like Open Sans, Fira Sans, Roboto and Lato are optimized for print and look decent in printed material as well.

Here we have selected some of the popular Google Fonts for your web and print design projects. 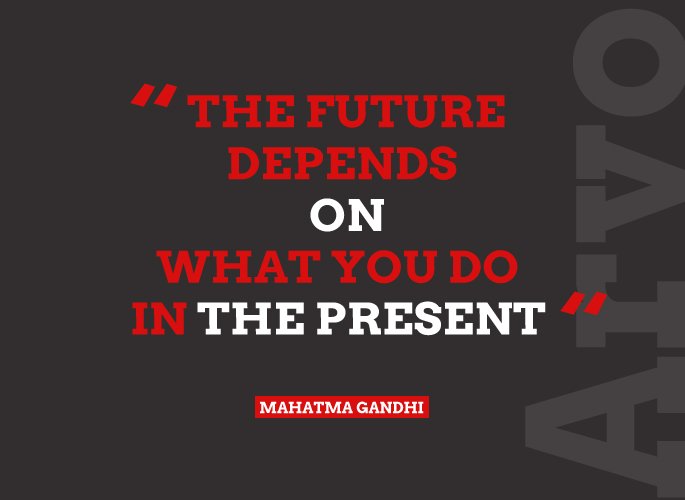 Arvo is a geometric slab-serif typeface family suited for screen and print. The flavor of the font is rather mixed, being nearly mono linear to increase legibility. Arvo is an Estonian name used for boys. In the Finnish language, Arvo means ‘number, value or worth.’ 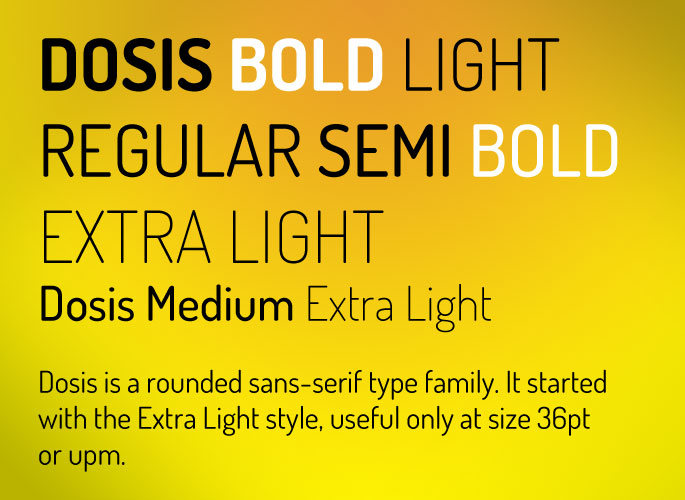 Dosis is a rounded sans-serif type family. It started with the Extra Light style, useful only at size 36pt or above and the Extended Latin character set included many alternative characters.  It’s designed by Edgar Tolentino and Pablo Impallari. 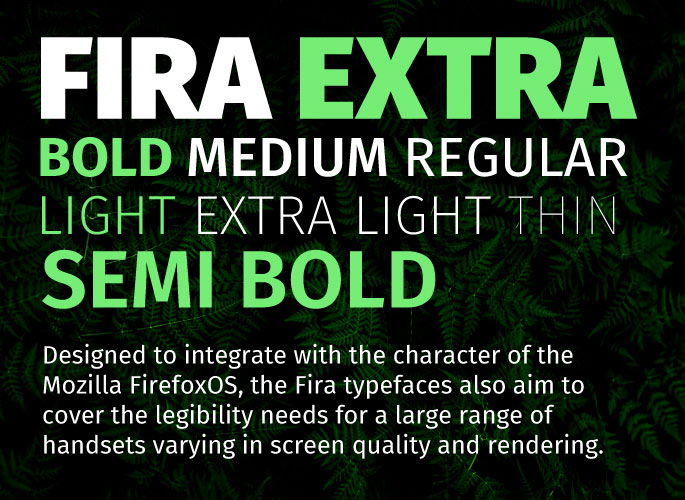 Fira Sans was Designed to integrate with the character of the Mozilla Firefox OS. The Fira typefaces also aim to cover the legibility needs for a large range of handsets varying in screen quality and rendering.

The Fira font family comes with 18 styles and there are two other variant font families like Fira Sans Condensed and Fira Sans Extra Condensed. This project is led by Ralph Carrois of Carrois Apostrophe, a type foundry based in Berlin.

Lato is a sans serif typeface family designed by Warsaw-based designer Łukasz Dziedzic. ‘Lato’ means ‘Summer’ in Polish.  Originally, the family was conceived as a set of corporate fonts for a large client, who in the end decided to go in different stylistic direction, so the family became available for a public release.

When working on Lato, Łukasz wanted to create a typeface that would seem quite “transparent” when used in body text but would display some original traits when used in larger sizes. He used classical proportions to give the letterforms familiar harmony and elegance. Learn more at www.latofonts.com 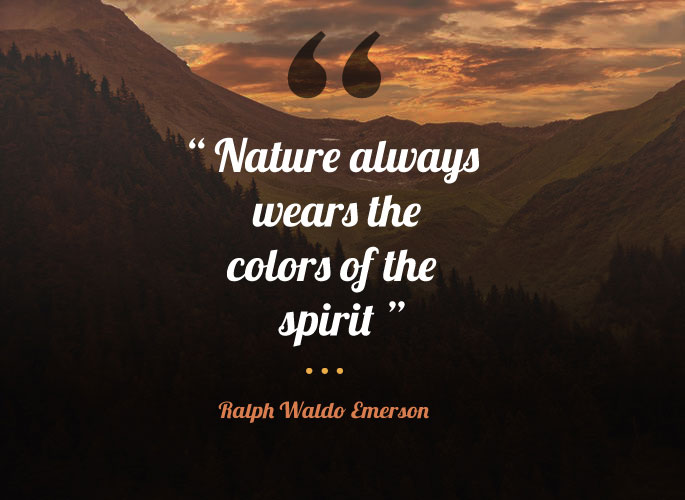 Lobster and Lobster Two are calligraphic fonts. Lobster comes in a single Regular style whereas Lobster two supports four styles. Bothe these fonts support different versions or letter-pairs of each letter (aka “ligatures”) and the best possible variation of each letter is picked depending of the context of the letter inside each word. All this happens automatically in any browser that supports ligatures. The font was designed by Impallari Type. 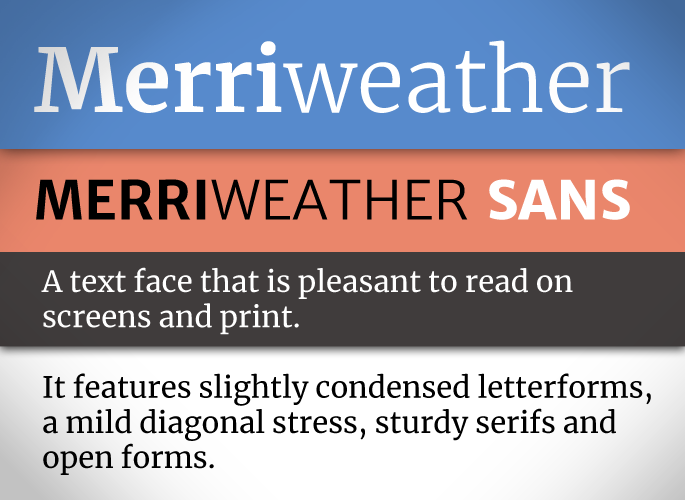 Merriweather was designed to be a text face that is pleasant to read on screens. It features a very large x height, slightly condensed letterforms, a mild diagonal stress, sturdy serifs and open forms.

There is also Merriweather Sans, a sans-serif version which closely harmonizes with the weights and styles of this serif family.

The Merriweather project is led by Sorkin Type, a type design foundry based in Western Massachaussets, USA. 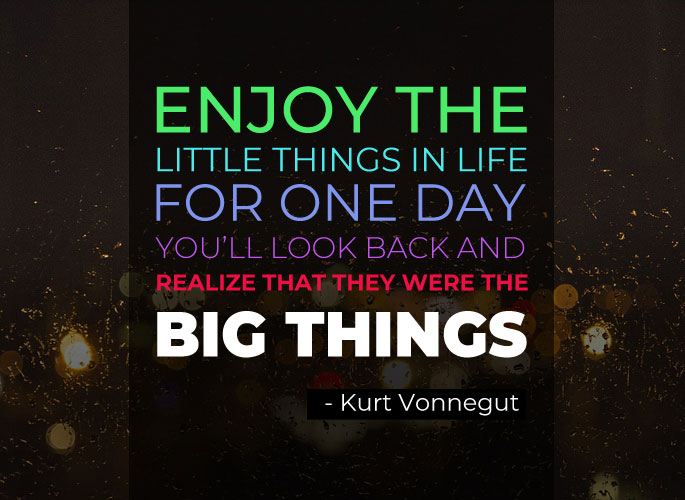 The old posters and signs in the traditional Montserrat neighborhood of Buenos Aires inspired Julieta Ulanovsky to design this typeface. The family was redrawn by Jacques Le Bailly in 2017 and the full set of weights were adjusted to make the Regular lighter and better for use in longer texts.

This is the normal family, and it has two sister families so far, Alternates and Subrayada. Many of the letterforms are special in the Alternates family, while ‘Subrayada’ means ‘Underlined’ in Spanish and celebrates a special style of underline that is integrated into the letterforms found in the Montserrat neighborhood. 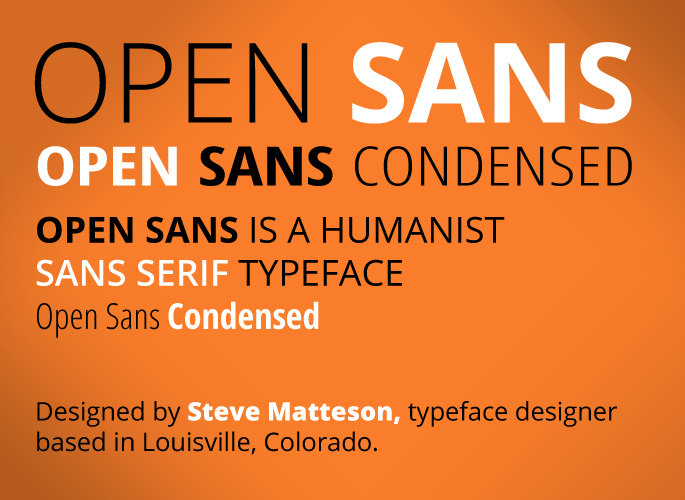 Open Sans is a humanist sans serif typeface designed by Steve Matteson. It is probably the most used Web Font as according to Google it is featured in more than 19,000,000 websites. Open Sans is used in some of Google’s web pages as well as its print and web advertisements.

It is optimized for web, print and mobile device interfaces, and has excellent legibility in its letterforms. Its design is similar to Droid Sans, created as the first user interface font for Android phones, but with wider characters and the inclusion of italic variants. It has a variant font family called Open Sans Condensed 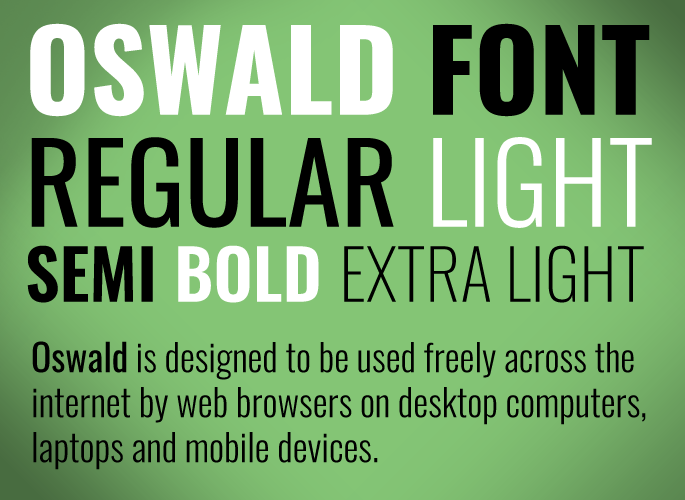 Originally designed by Vernon Adams and updated by Kalapi Gajjar and Alexei Vanyashin to support languages that use the Cyrillic script. Oswald is a reworking of the classic style historically represented by the ‘Alternate Gothic’ sans serif typefaces. The characters of Oswald were initially re-drawn and reformed to better fit the pixel grid of standard digital screens. Oswald is designed to be used freely across the internet by web browsers on desktop computers, laptops and mobile devices. 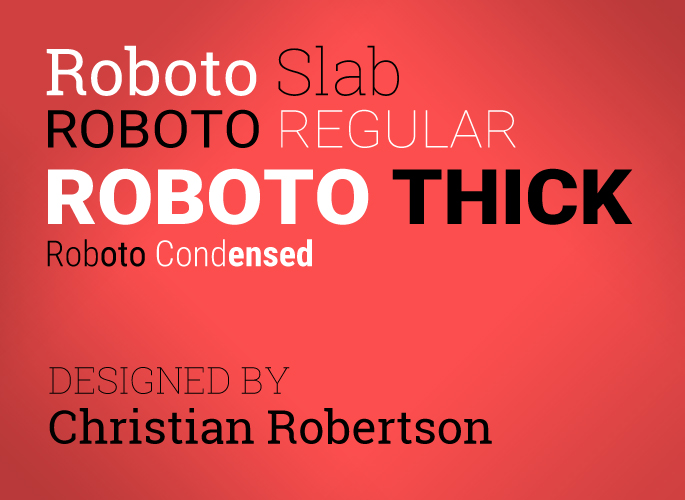 Roboto font family was designed by Christian Robertson and commissioned by Google for its Android OS. It was used as the system font in its Android Operating Systems.

Google describes the font as “modern, yet approachable” and “emotional”. The font family has been licensed under the Apache license and was first made available on the newly launched Android Design website. It includes Regular, Medium, Thin, Light, Bold and Black weights with matching oblique styles. 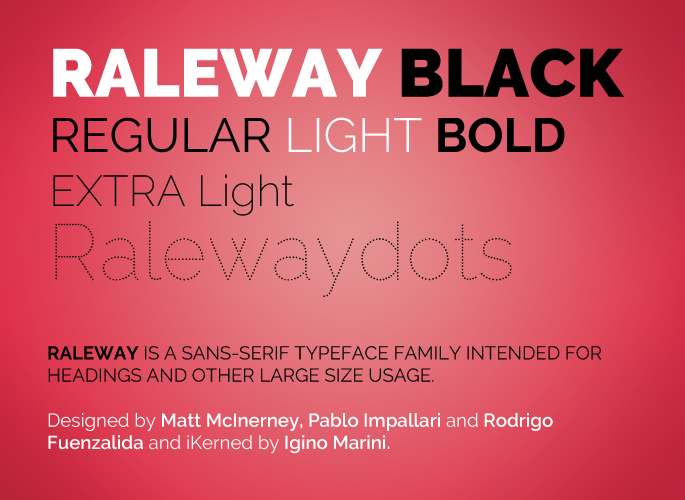 Raleway is a sans-serif typeface family intended for headings and other large size font usage. Initially designed by Matt McInerney, it was expanded into a 9 weight family by Rodrigo Fuenzalida and Pablo Impallari in 2012 and iKerned by Igino Marini.

It also has a sister family, Raleway Dots. 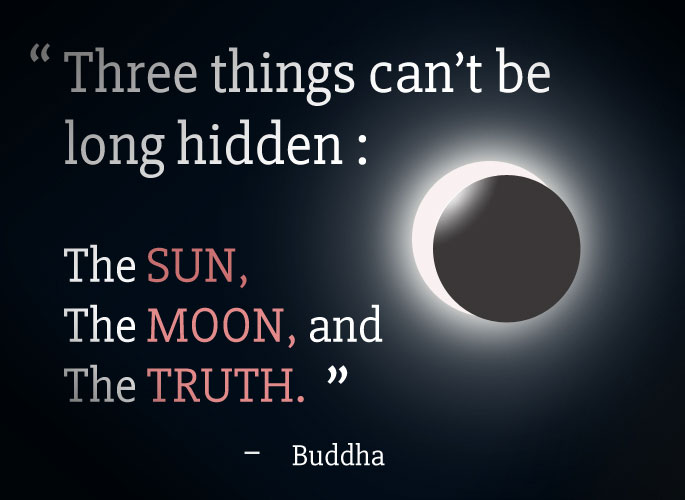 Slabo is a collection of size-specific fonts for use in online advertising and other web uses. Each font in the collection is fine-tuned for use at the pixel size in its name. The Slabo project is led by Tiro Typeworks, a type design foundry based in Canada. 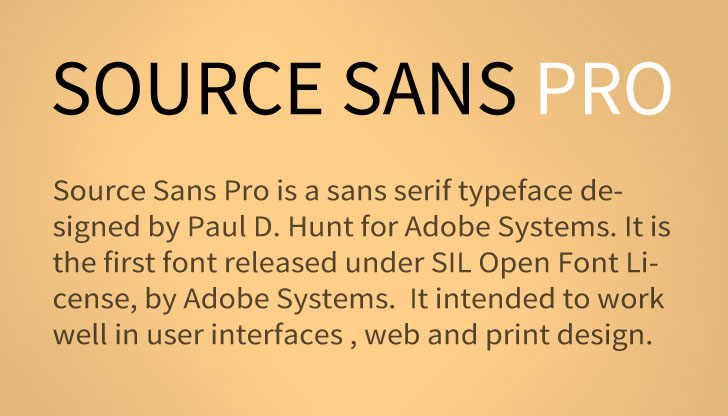 Source Sans Pro is a sans serif typeface designed by Paul D. Hunt for Adobe Systems. It is the first font released under SIL Open Font License, by Adobe Systems.  It intended to work well in user interfaces , web and print design. 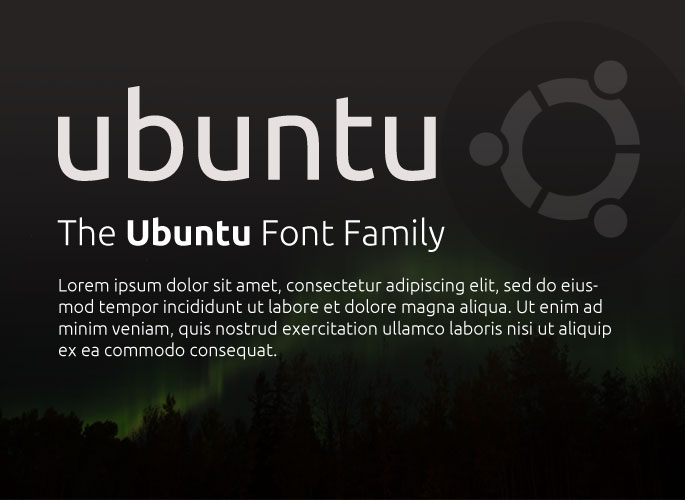 The Ubuntu Font Family are a set of matching new libre/open fonts in developed and funded by Canonical Ltd on behalf of the wider Free Software community and the Ubuntu project. The technical font design work and implementation was handled by Dalton Maag.

The new Ubuntu Font Family typeface is sans-serif, uses OpenType features and is manually hinted for clarity on desktop and mobile computing screens.

So, this was the list of the most popular font from Google fonts. These fonts unlike most free fonts were designed by professional type foundries and designers. You can safely use them for any project without worrying about licencing.