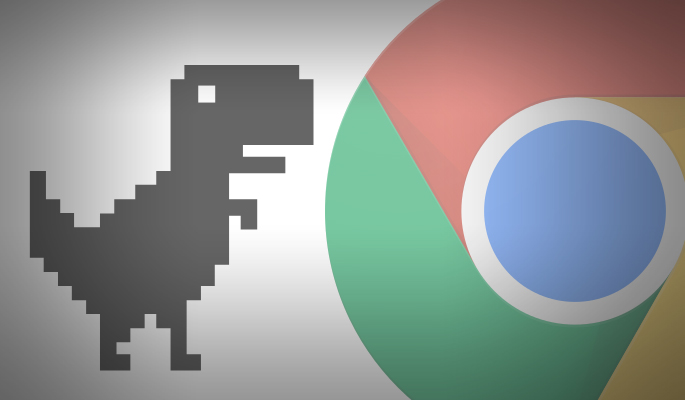 Google Chrome’s Dinosaur game was introduced in September 2014 as an Easter egg on Chrome’s Browser 10th birthday. The Dinosaur appears whenever you are disconnected from the internet and try to visit a website.

It appears as a static pixel art image but the moment you hit the space bar on your keyboard the Dinosaur game starts. The game can even be played in Android Chrome Browser by tapping on the dinosaur.

The game is quite popular and there are around 270 million game plays every month both on laptops and mobiles.

“There’s nothing fun about getting kicked offline—unless you have a friendly T-Rex to keep you company, that is,” explains Chrome UX engineer Edward Jung on the motivation behind Chrome’s offline Dino game.

It’s a very simple game with very basic controls. You use space bar or the up arrow to jump your dinosaur over cacti in a desert setting. You hit a cactus and die and it’s game over for you. As you progress the game enters night mode and then after sometime pterodactyls or the flying dinosaur appear. You can use the down arrow key to duck under the pterodactyls.

The Game never ends. You can play it till eternity as according to Google it is programmed to end after 17 million years.

How to play it without disconnecting internet?

Open a new tab. Just enter chrome://dino/ in your address bar and hit space bar. This would start the Game even when you are connected to the internet.